A Best Friend for Bear 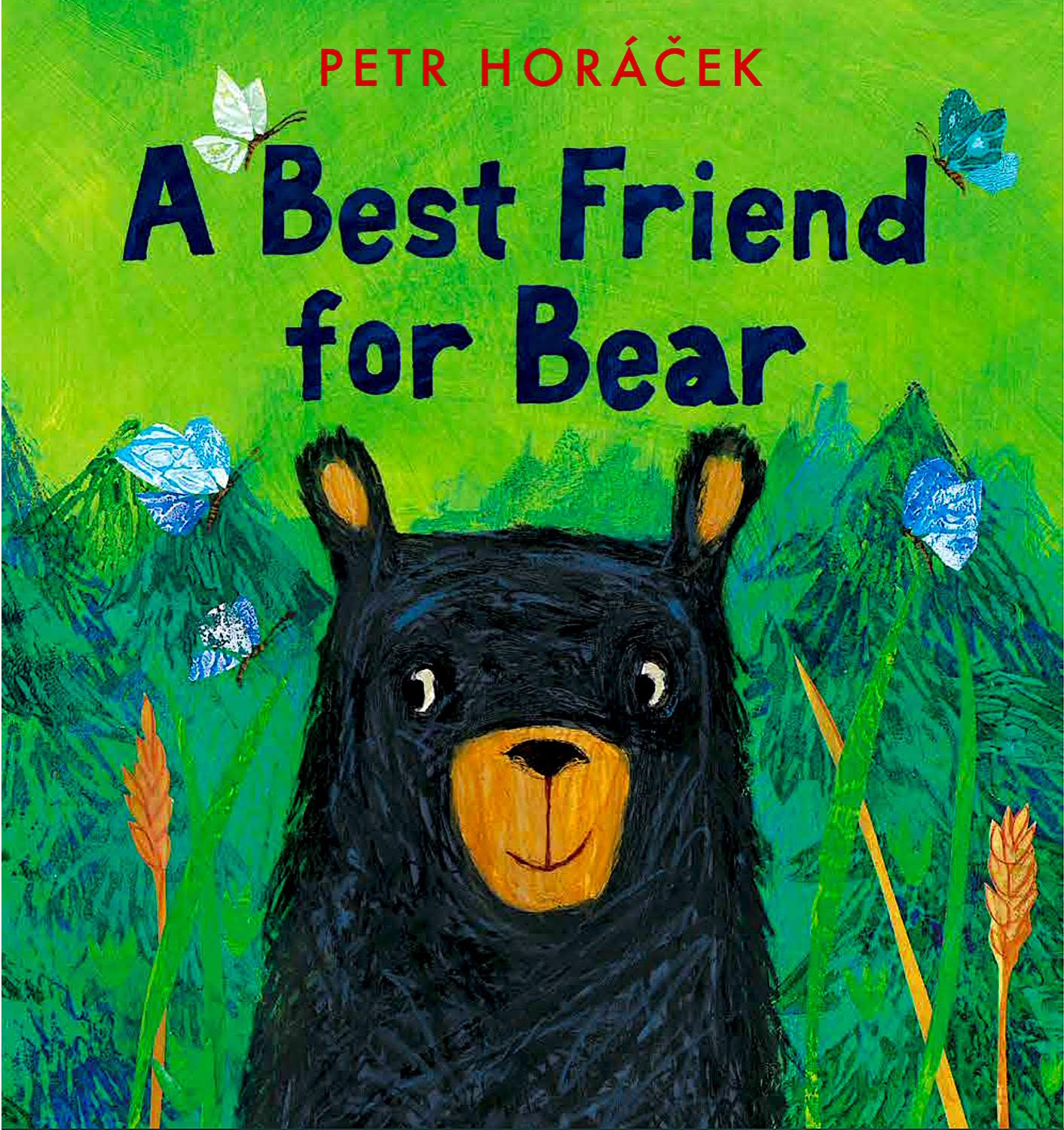 Whenever I’m asked the question “What is your favourite animal?” I would say an elephant, because they are easy to draw. Sometimes I would say a bear, because I really like bears.

I do like drawing bears too and it’s surprising, that it took me twenty two years to write a book about a bear.

It’s not that I didn’t want to write a book about a bear earlier, I just couldn’t come up with a good idea. 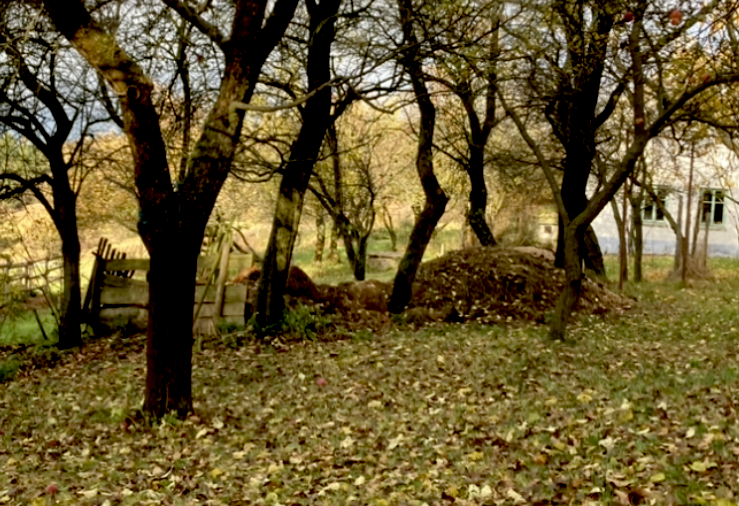 Every autumn I spend a couple of weeks on my own at my friend’s cottage in the Czech countryside. 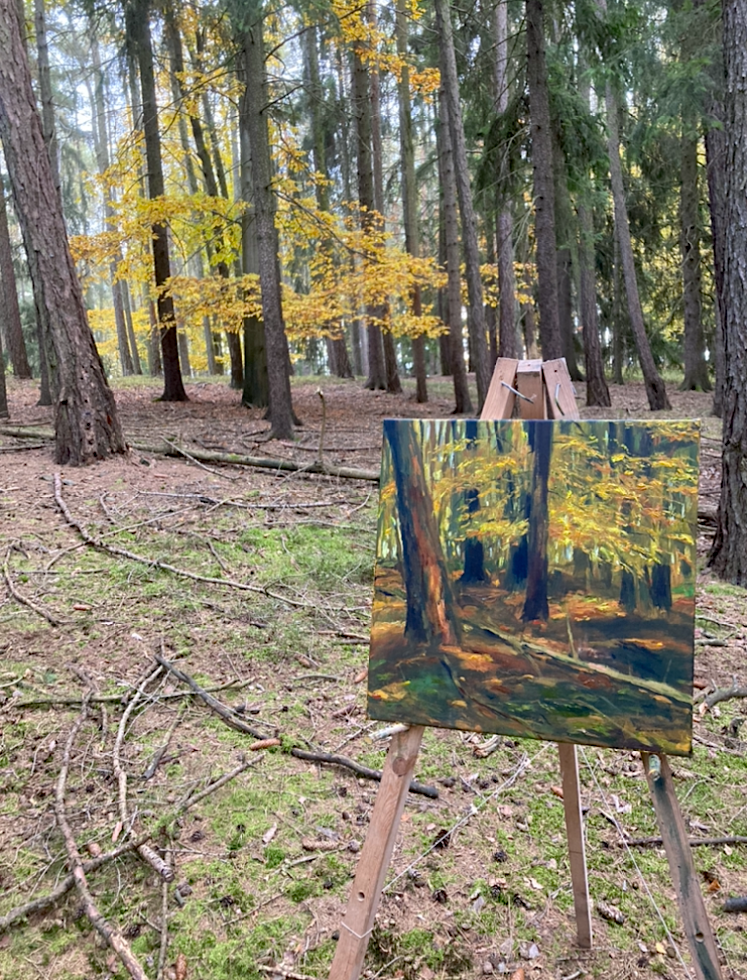 I paint and walk in the woods, thinking about new ideas for a book, trying to write them down in the evenings by the fire. 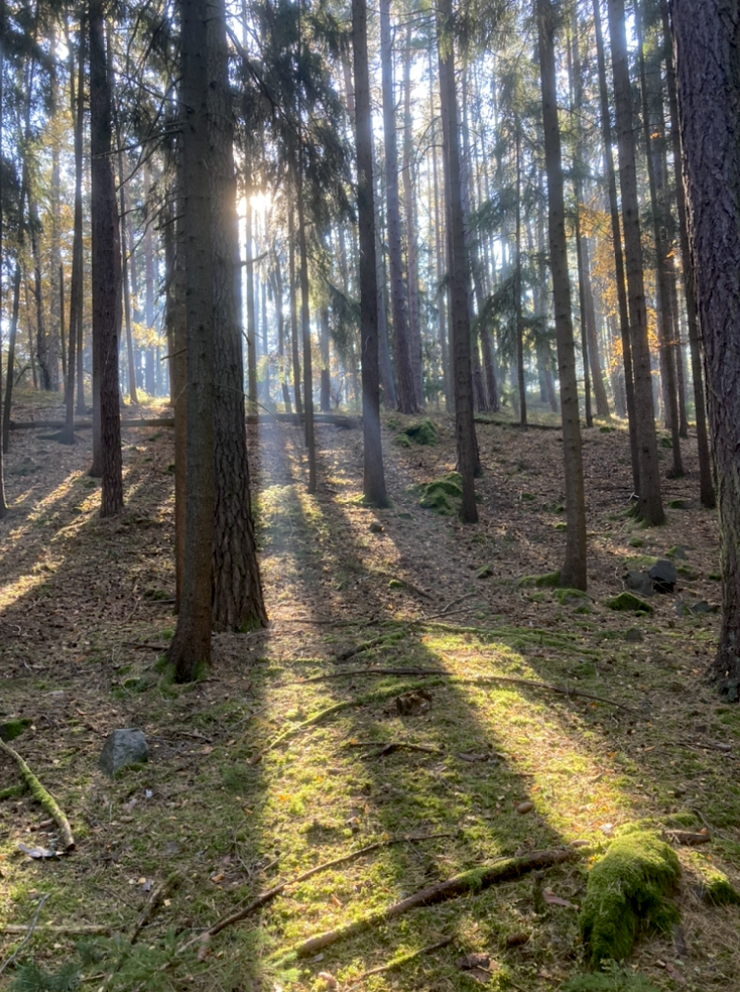 I don’t always come back to England with a finished book, but I always bring back enough material to work with through the year. I then spend months writing, sketching, rewriting and starting again… 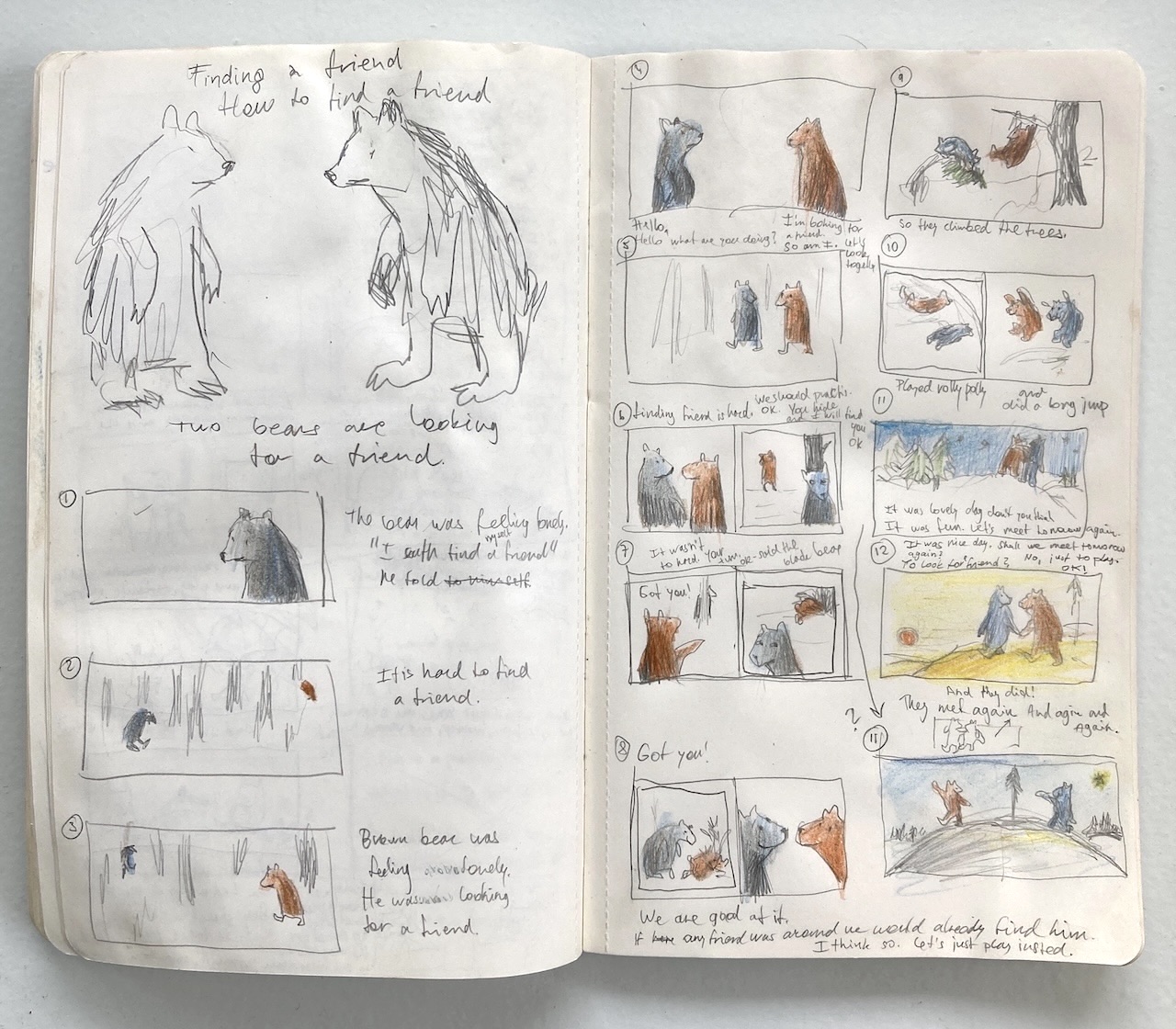 The idea for this book came to me as I was walking in the woods.

This book was one of the books when the idea just pops out and you know exactly how to write it down.

Not every book is like this. Usually I rewrite the story many, many times before the publisher is happy.

This time it was easy. Well, let’s say…this time I thought it’s going to be easy.

Of course, to make the book work takes time and there are always some changes.

But from the beginning I knew I would like to write a book about friendship, also about the fact, that we are often unable to see things that are right in front of our noses. The book is also about how we can find friendship in places and situations where we least expect it.

The other thing that surprised me was also the process of illustrating the book. I thought that painting a bear shouldn’t be difficult, because I had done lots of drawings of bears before and whenever somebody says: “Draw me something” I would often draw a bear. Drawing bears should be easy, right?

I use collage for my illustrations, but bears are hairy and a cut out bear didn’t work.

I used acrylic paint, but the bears looked heavy and the texture wasn’t right either.

It took me some time until, probably out of frustration, I grabbed oil pastels and started colouring the bear with oil pastels. I mixed blue and black for the black bear and brown and orange for the brown bear. I scratched into the oil pastels and painted over…it worked. 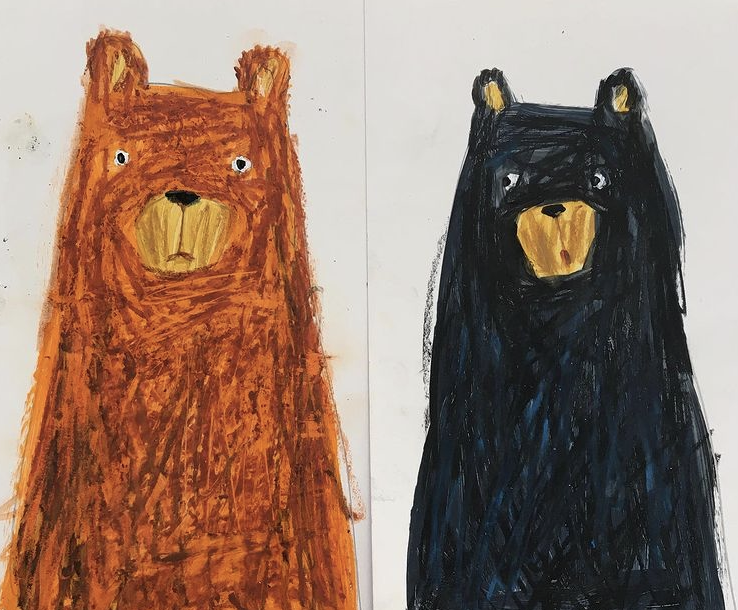 Here are the first sketches of the bears. 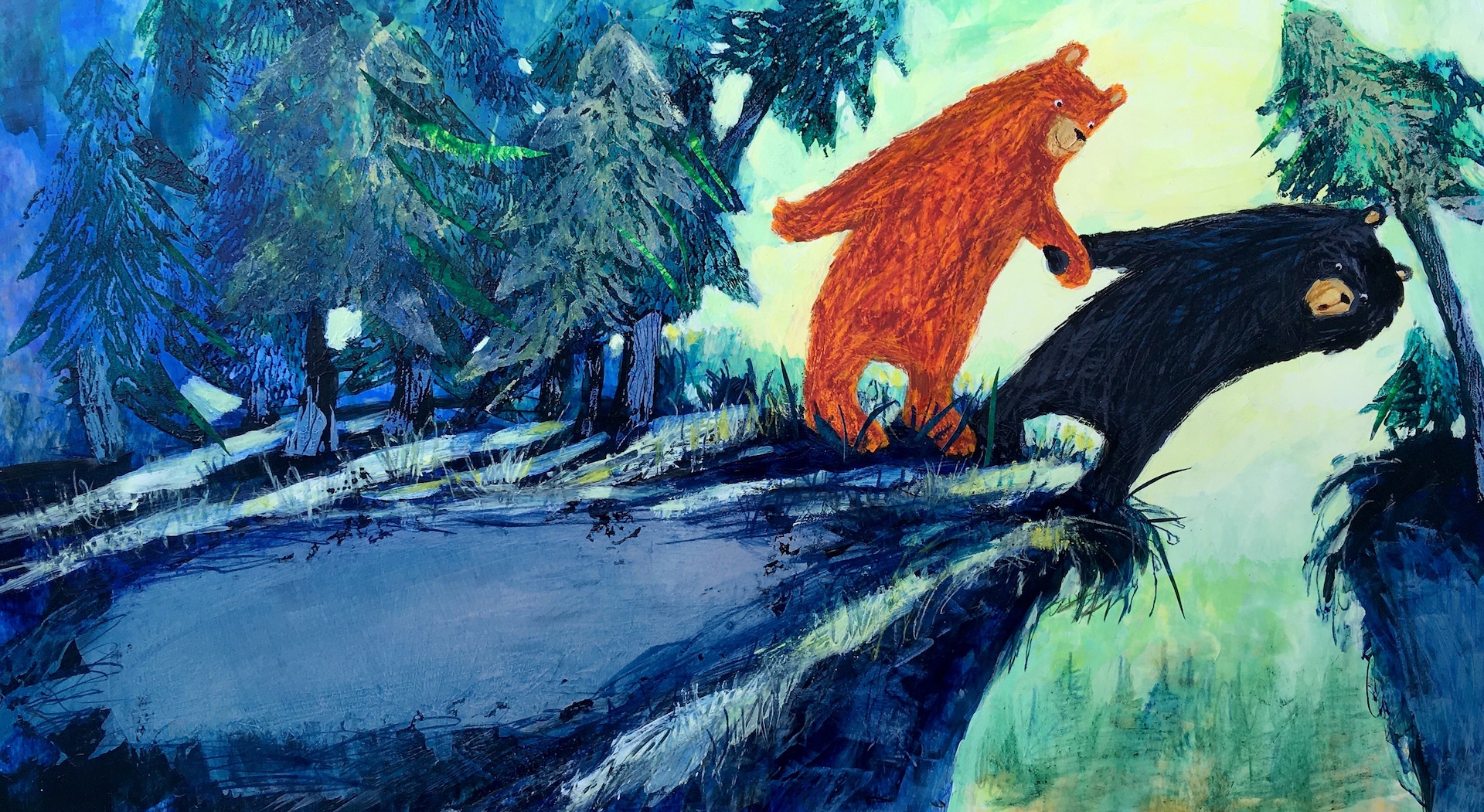 Here are some other changes I made. 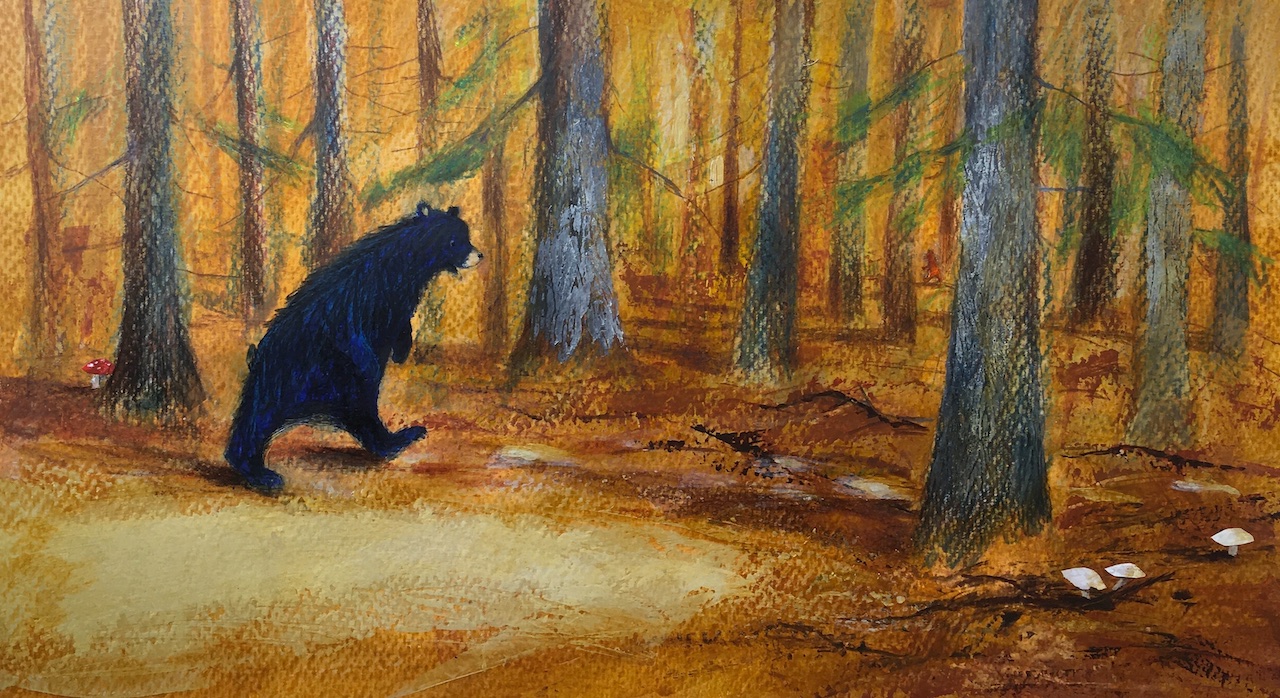 The first illustration, which I changed many times. 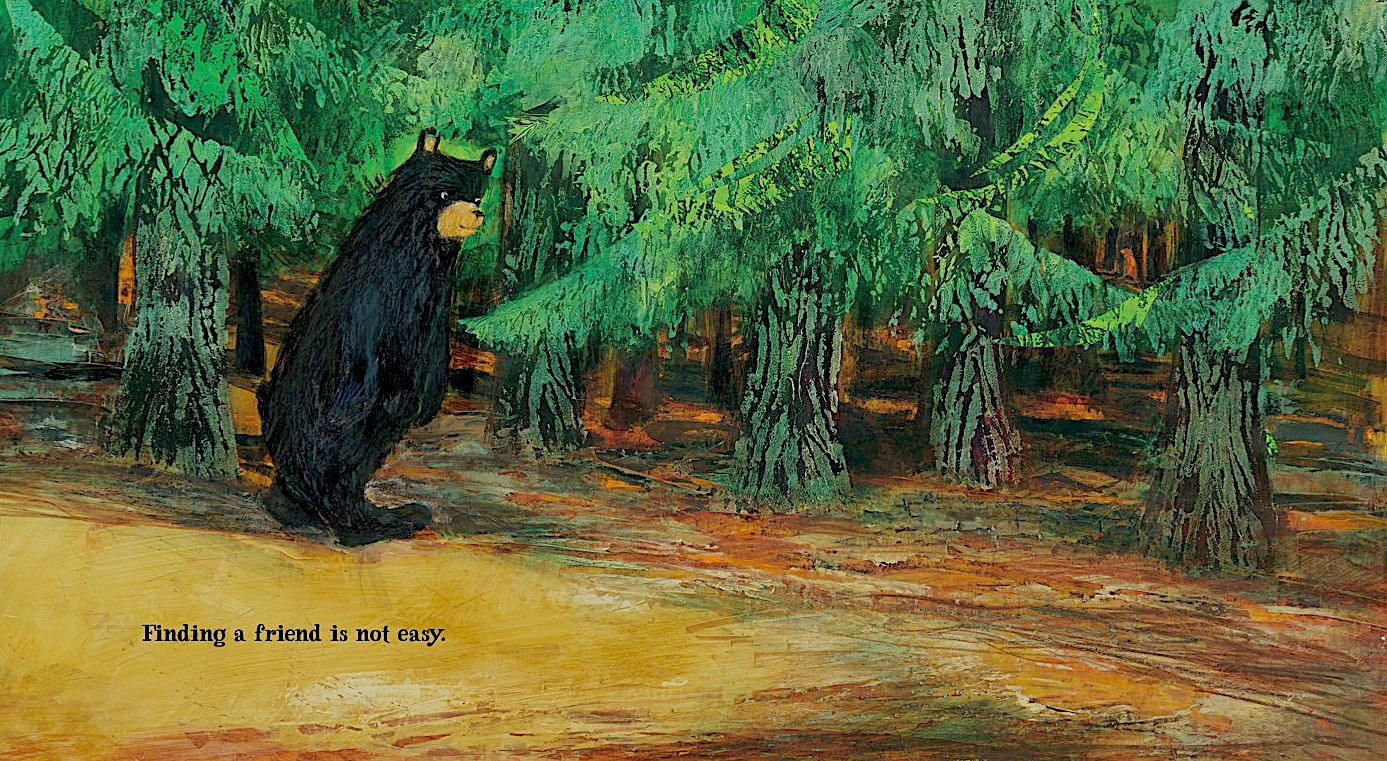 And the final picture as it is in the book.

If you look carefully, you can see the brown bear is already entering the scene. He’s walking on the right page, between the trees. 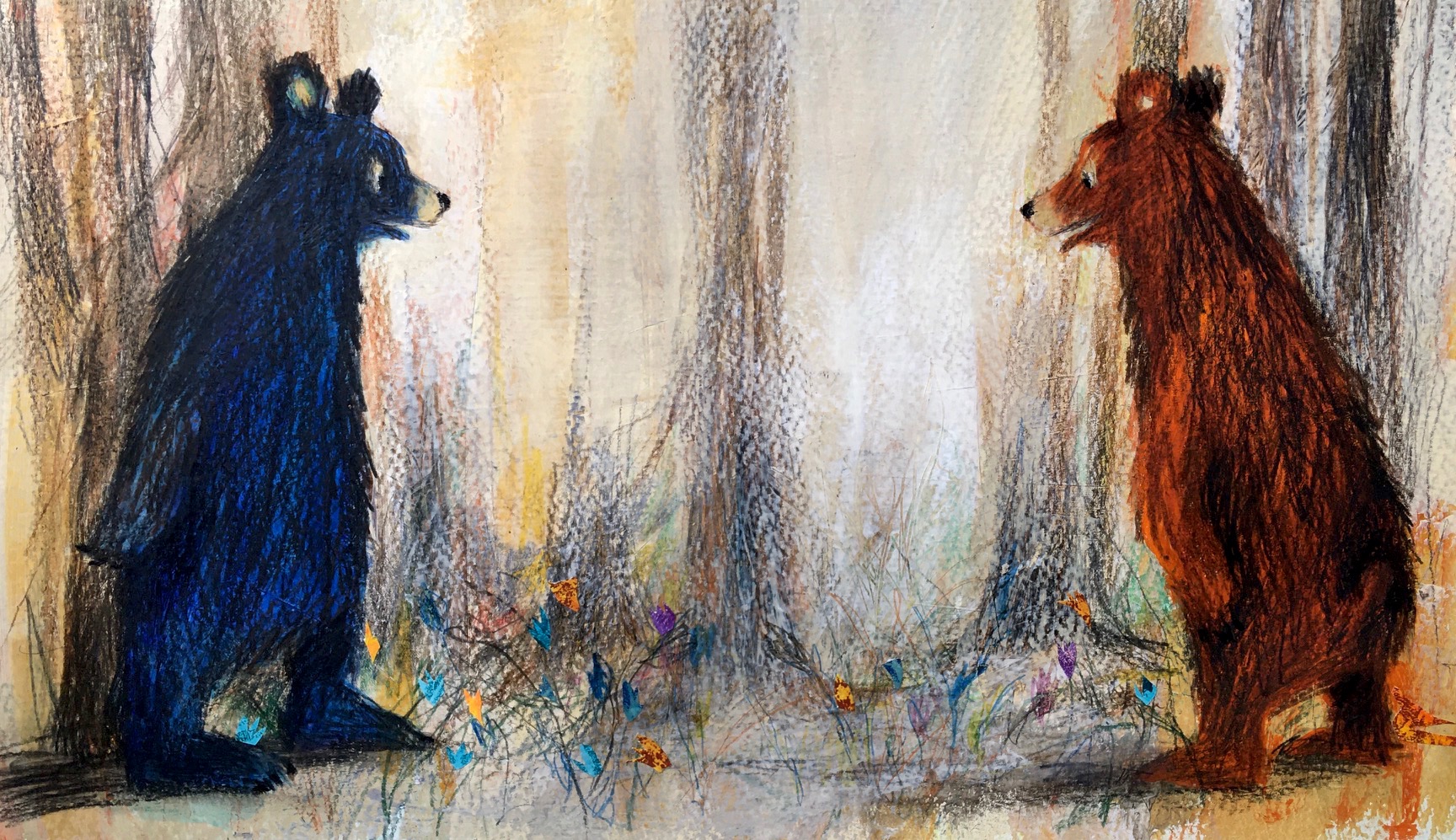 This is also one of the first illustrations before I started again and changed the whole book. 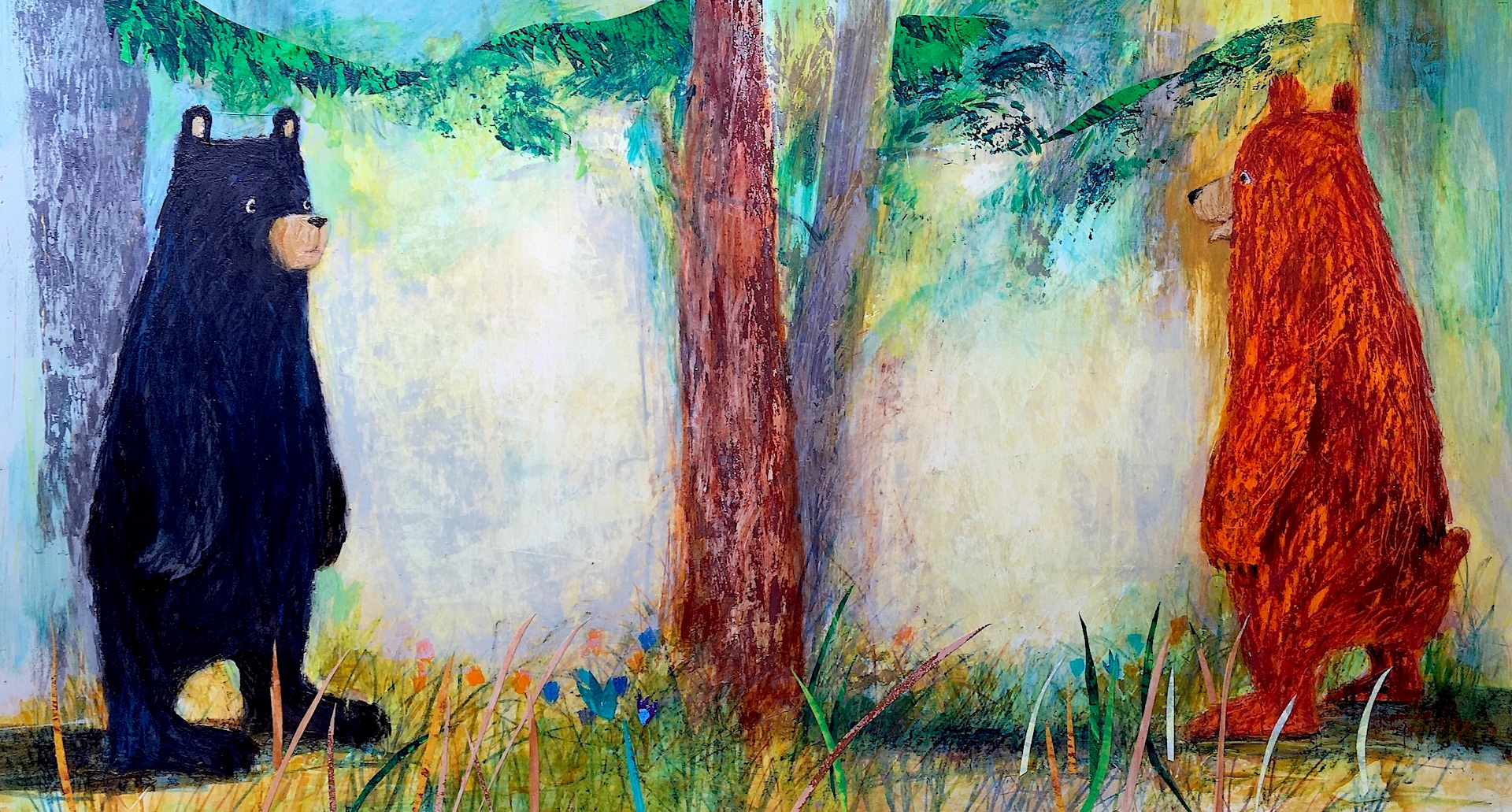 Writing the book was fun. I remember smiling a lot as I was writing it down. 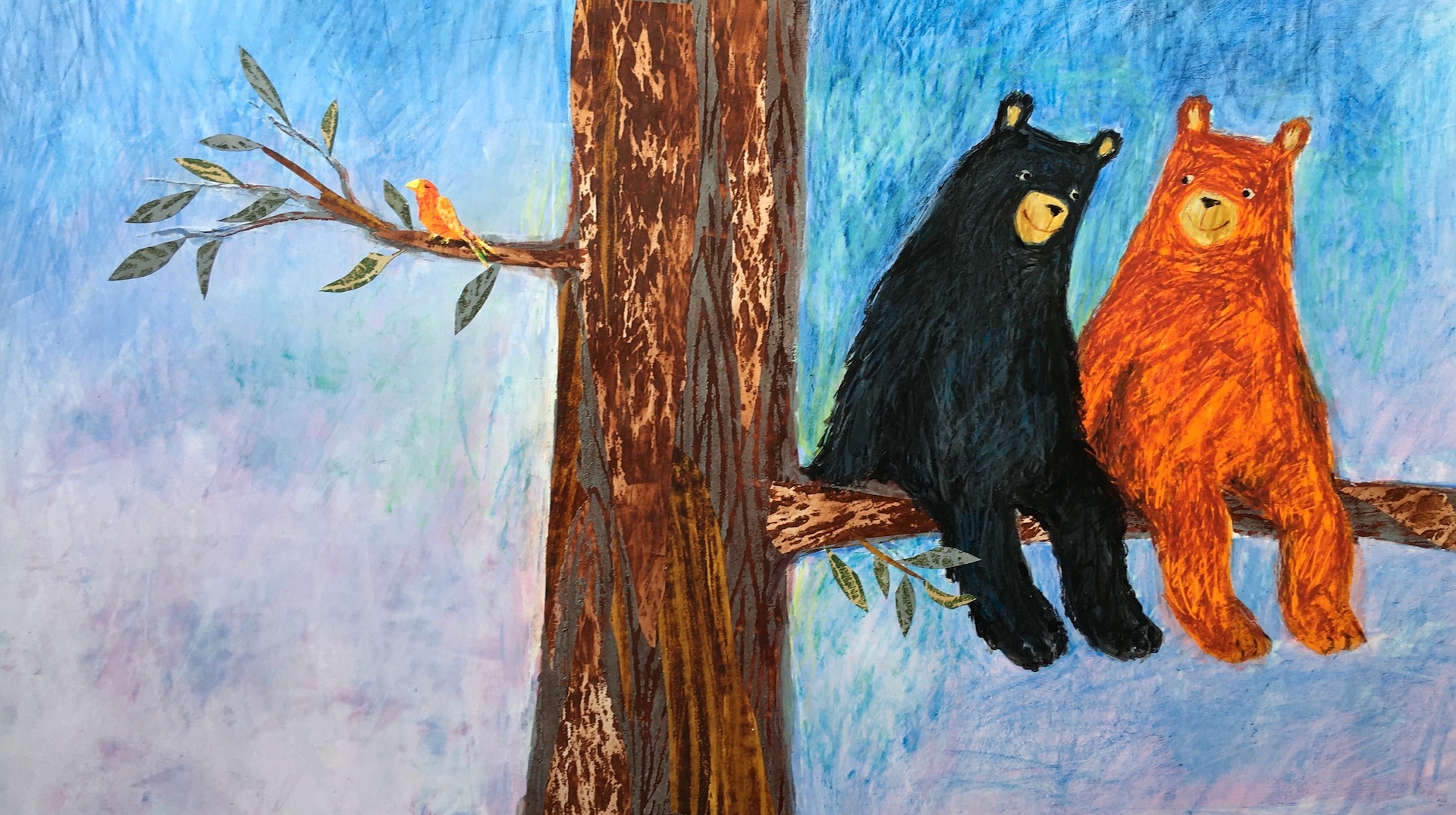 Illustrating the book was more challenging than I expected, but I had fun experimenting with, for me, new materials.

Well, here is the book. I hope you will like it. It is published on 7th April. On sale everywhere including Bookshop.org. 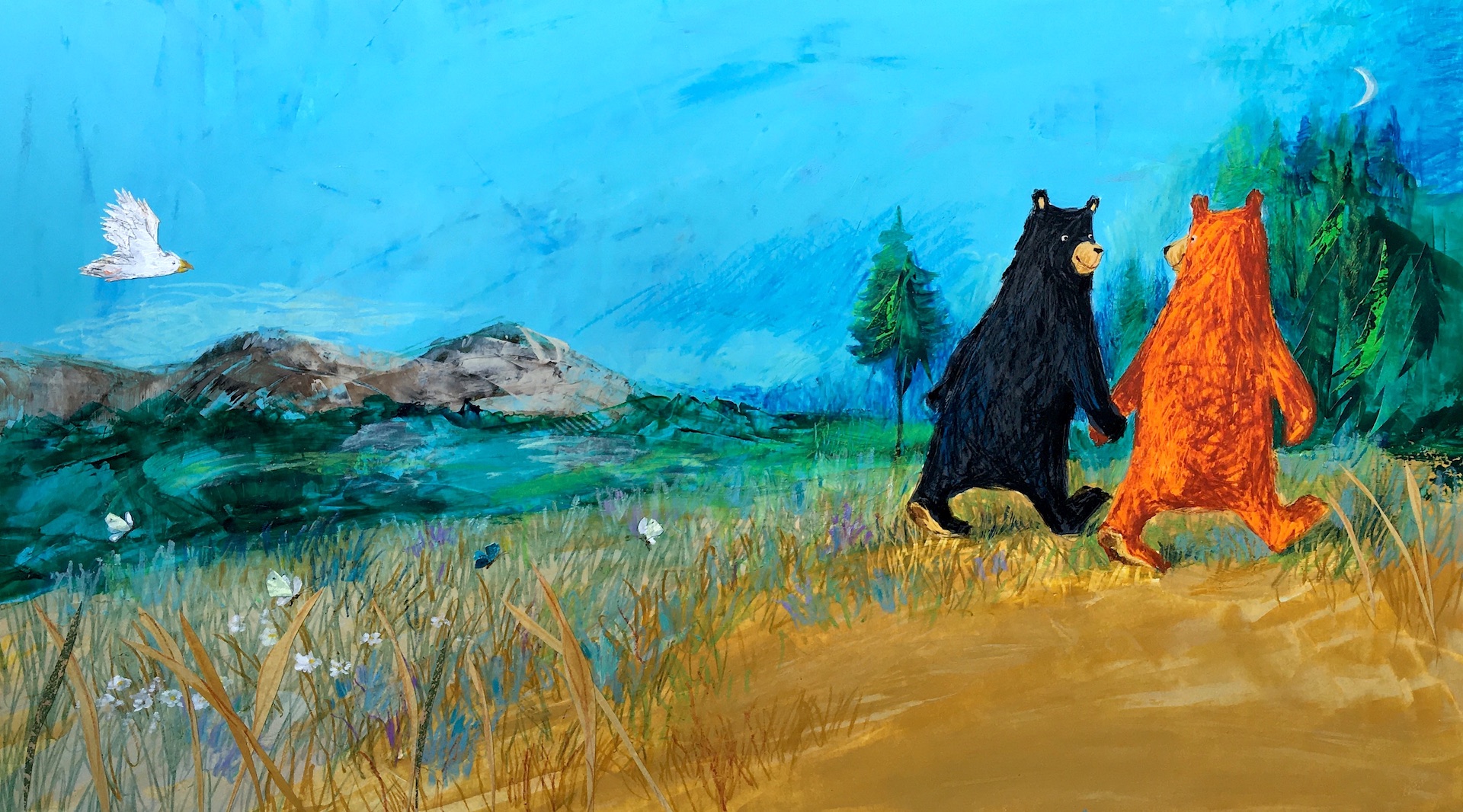